At least 32 people have died and others have been injured in a huge fire at a karaoke complex in southern Vietnam near Ho Chi Minh City.

The fire broke out on the upper floor of the establishment on Tuesday night, trapping customers and staff.

To escape, four people jumped from the second and third floors, local media said. They were injured but survived.

Firefighters reached the scene shortly after alarms went off. The cause of the blaze is being investigated.

Cong An Nhan Dan newspaper, the official mouthpiece of the Public Security Ministry, said 32 people were now confirmed to have lost their lives, including 17 men and 15 women.

The search for victims has ended, the VnExpress news site quoted an official saying. There were around 60 people in the bar when fire broke out, the public security ministry said.

“The fire started on the second floor of the bar and quickly spread to the third floor, which was full of flammable material,” it said in a statement.

A top official with the ruling Communist Party in Binh Duong province to the north of Ho Chi Minh City, where the bar is located, had earlier put the death toll at 23, with 11 injured.

The An Phu karaoke bar occupied a significantly sized building with 29 rooms. State media reported the bodies of eight people were found in the toilets.

About a third of the building had been on fire, local officials said. It had several decorations and wooden decor, BBC Vietnamese reported.

Crews said the blaze took just under an hour to bring under control.

This is the deadliest in a series of fires in karaoke bars in Vietnam in recent years, raising concerns over poor safety standards. Last month, three firefighters died as they tried to extinguish a fire at a karaoke venue in the capital Hanoi.

In 2016 a fire at another karaoke lounge in Hanoi left 13 people dead. 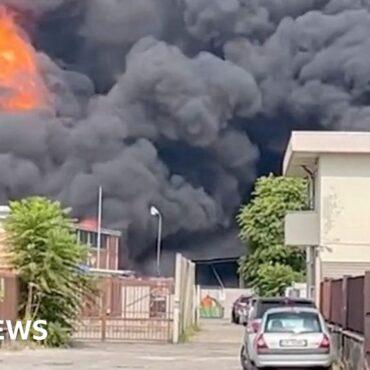 A large chemical fire has broken out in the industrial area of San Giuliano, near Italy's northern city of Milan.Firefighters tackled the blaze as black smoke blew across the neighbouring buildings. According to the Italian fire brigade, at least six people have been injured. Crews continue to tackle the blaze.