More than two million migrants were detained at the US-Mexico border over the past year, a record figure that creates a political headache for the Biden administration.

According to new figures from US Customs and Border Protection (CBP), the figure of 2.15 million represents a 24% increase on the year before.

The statistics show that the number of migrants from Venezuela, Nicaragua and Cuba rose dramatically, while the number from Mexico and Central America’s Northern Triangle of El Salvador, Guatemala and Honduras fell.

In a statement, CBP Commissioner Chris Magnus said that “failing Communist regimes” were “driving a new wave of migration” at the border.

Experts point to several other reasons for the spike, including large numbers of repeat crossings and lingering pandemic-related economic issues across Latin America.

The rising number of migrants at the border is a politically contentious issue ahead of the US midterm elections in November.

President Joe Biden and other Democrats have been criticised by political opponents over the rise, while there has also been growing tension between the White House and some state governments – most visibly in the form of migrants being bussed or flown to Democratic-run areas such as New York and Washington DC.

Why the recent spike?

The number of migrants arriving at the border rose dramatically after Mr Biden took office in late January 2020.

Experts point to a number of reasons for the increase, including environmental disasters and economic woes in El Salvador, Honduras and Guatemala. In other cases – such as Cuba, Nicaragua and Venezuela – economic problems have been compounded by political repression. 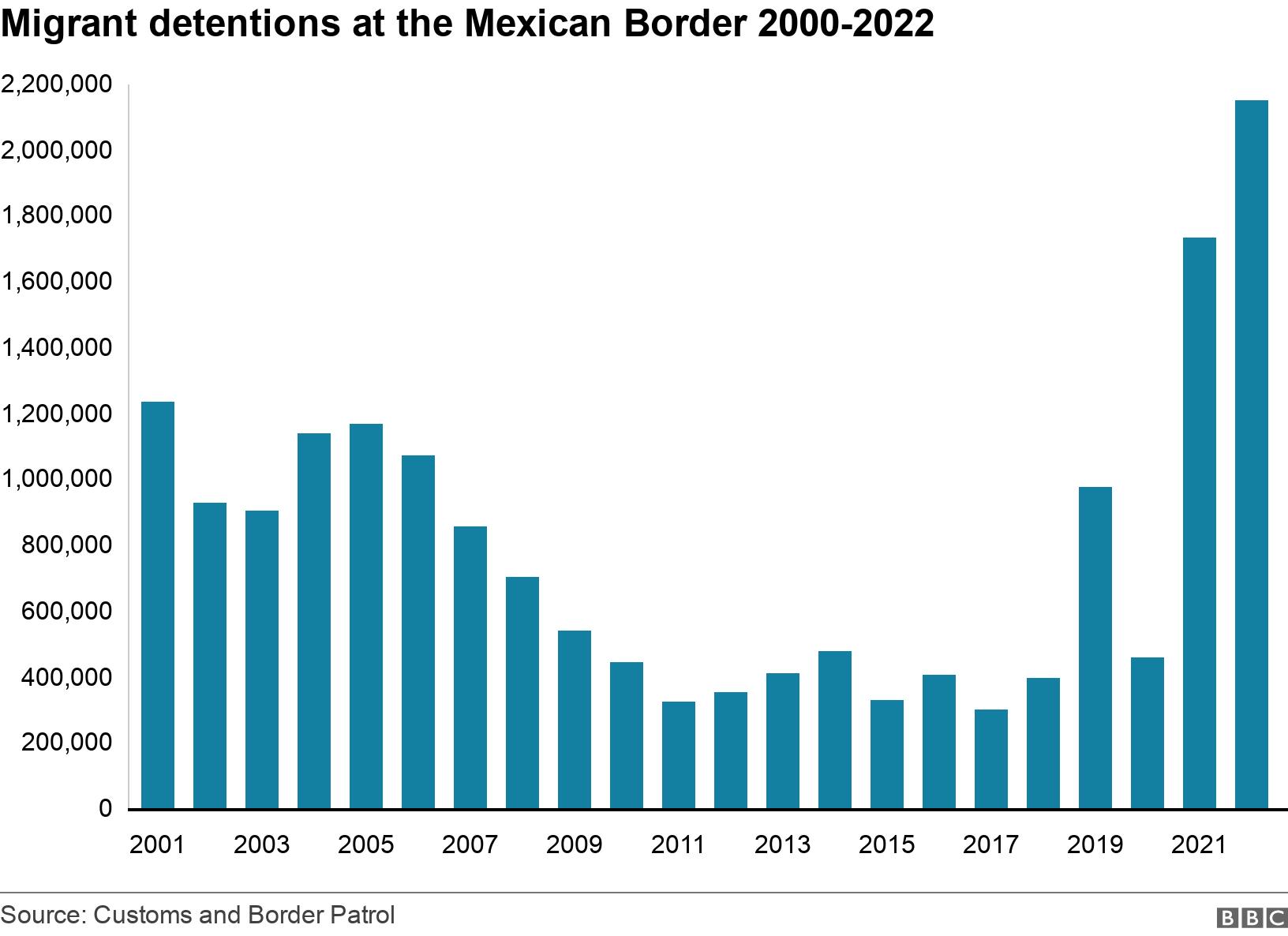 “There’s a level of desperation we hadn’t quite seen before,” said Adam Isacson, a migration and border expert from the Washington Office on Latin America. “And you’ve got people coming from countries that had not sent migrants in significant numbers before now becoming top senders of migrants, due largely to a lack of economic opportunities. Smugglers take advantage of that.”

Many of the migrants are now seeking asylum, a process which was severely restricted by the previous US administration of Donald Trump.

Where are the migrants from?

Migrants from Mexico and the countries of Central America’s Northern Triangle – Guatemala, El Salvador and Honduras – continue to account for the bulk of the total, with Mexicans alone accounting for about 744,000 of the detentions over the past year.

CBP’s August figures, however, highlight shifting migration patterns. The number of Mexicans, Salvadorans, Guatemalans and Hondurans fell 43% compared to August 2021. The numbers of Cubans, Nicaraguans and Venezuelans, on the other hand, have risen 175% over the same time period.

Collectively, these three nationalities account for about 494,000 of the migrant detentions this year.

Ariel Ruiz, a policy expert with the Washington DC-based Migration Policy Institute, noted that the links between these countries also contribute to increases in each.

Cuba, for example, has lost much of the aid it received from Venezuela pre-pandemic – creating more economic difficulties there – while Nicaragua’s decision last year to eliminate visa requirements for Cubans means they now have a starting point to begin their journey from Central America to the US. A lack of diplomatic relations between the US and these countries also means that the US cannot repatriate them home.

“We have a system of enforcement at the border that’s really meant to respond to Mexican migration,” Mr Ruiz said. “All these policy schemes have combined in some ways to provide an opportunity for migrants to head northward, at the same time as economic conditions and political repression worsen in these countries.”

Mr Biden, for his part, has said that sending migrants back to Cuba, Venezuela or Nicaragua is “not rational” and that he is working with Mexico and other countries to “stop the flow”.

The policy – known as Title 42 – was originally aimed at preventing the spread of Covid-19 in holding facilities.

Some experts, however, believe that Title 42 has caused migrant figures to rise as the policy does not prevent migrants from multiple crossing attempts.

On Monday, CBP said “the large number of expulsions during the pandemic has contributed to a higher-than-usual number of migrants making multiple border crossing attempts”.

Mr Isacson said that the policy leads to statistical “distortions”.

“We’re not actually hitting two million individuals, But Title 42 has made it easy for people to try over and over and over,” he said. “If they keep getting caught, there’s no real sanction.”

Statistically, Mexican citizens are likely to be repatriated back to Mexico, which also accepts migrants from Guatemala, Honduras and El Salvador. Collectively, more than 962,000 citizens of these countries have been sent back across the border using Title 42 over the past year compared to less than 10,000 from Nicaragua, Cuba and Venezuela.

A political headache for Biden

The rising migrant figures represent a growing political problem for the Biden administration, particularly with the midterm elections rapidly approaching.

Three Republican-run states – Texas, Arizona and Florida – have announced initiatives to move migrants to Democratic-led ones, sometimes leaving them at high-profile locations such as wealthy Martha’s Vineyard in Massachusetts or near Vice-President Kamala Harris’ residence in Washington DC.

Officials in these states have argued that the tactic is aimed at mitigating the impact of migration flows in local communities. Florida Governor Ron DeSantis, for example – who earlier in September began to fly migrants to Massachusetts – said that “the minute even a small fraction of what those border towns deal with every day is brought to their front door, they [Democrats] all of a sudden go berserk”.

The issue of migrants at the border is one that is likely to have an impact at the polls. A recent poll from NPR and Marist, for example, found that immigration was a primary electoral issue – behind only inflation – for 20% of Republican voters, compared to 1% of Democrats.

Juscelino Colares, a professor of political science at Case Western Reserve University, said the issue is one that has the potential to cause “swing” among many voters, particularly those who live near the border – even among those who are naturalised immigrants or the children of immigrants.

“[People there] have seen the demands that uncontrolled immigration has brought to their localities. And they, and those migrants who have become legal, tend to hold the view that immigration should be taken seriously,” he said.

“I think inflation will play a bigger role in the midterms and the economy is causing greater concern, but immigration is a significant concern to the US electorate,” he added.

By Catherine ByaruhangaAfrica correspondent, BBC NewsImage source, Getty ImagesImage caption, Military service is compulsory in Eritrea (file photo)Eritrean troops have launched a full-scale offensive in Ethiopia's Tigray region, a spokesman for the Tigrayan rebel group, the TPLF, has said.A US envoy said the US was aware of Eritrean troops crossing into Tigray, and condemned it.The Eritrean and Ethiopian governments have not yet commented on the claims.If Eritrea's offensive against the […]