Pakistani health officials are warning of a looming health crisis in the country after devastating recent floods.

Thirty-three million people have been affected by the flooding, which has left nearly 1,500 dead since the middle of June.

As rescue and evacuation efforts continue in parts of the country, health experts are reporting a surge in dengue, malaria and severe gastric infections.

Many displaced people are living near stagnant water. Dengue fever is already claiming lives and cases are increasing by the day.

About 3,830 cases of dengue fever have been reported by health officials in southern Sindh province, with at least nine deaths, but there are concerns this may be a conservative estimate.

“Overall the situation in Sindh is very bad, we are organising medical camps all over the province. Most of the cases we are seeing now are of dengue patients followed closely by malaria,” Dr Abdul Ghafoor Shoro, secretary general of the Pakistan Medical Association, told the BBC.

“The dengue burden is the same all over the province and it’s increasing daily. When we checked with the laboratories, the suspected cases are around 80% of tests being done.”

Dr Shoro, who has been treating scores of dengue patients at Agha Khan hospital in Karachi, fears the situation is only going to worsen in the coming weeks.

It’s been more than two months since the floods began and yet across Pakistan, thousands of villages are still submerged, leaving countless families displaced.

With roads in many remote communities still unusable because of water damage, some communities are forced to rely on mobile vans for their health care, but those are few and far between.

Muna Sajjad has brought her one-year-old, Sakina, to a mobile clinic near Sehwan in Sindh province, hoping she will finally get medical care.

Sakina has been unwell for some days with a gastric infection. Her mother holds her tightly to her chest to try to settle her, but Sakina won’t stop crying – she is dehydrated, vomiting and in pain.

“Two of my children are unwell, I don’t have any money to care for them, I lost everything in the floods,” says Muna. “If I had not made it to the clinic, I’m sure Sakina would have died. We have no food to even feed ourselves and our sick children.”

Inside the packed van, there are sick children and adults everywhere and not enough hands to care for them. Doctors tell us they are overstretched.

“There are so many people, we are trying our best to get to everyone, but we do not have the capacity to help everyone,” says a senior medic, Khalid Khosa. “We are seeing hundreds of patients a day, but there are many more we cannot serve. It’s not just us that are overwhelmed, it’s like this across the province.”

Dr Khosa is also a monitoring officer, looking into the scale of disease in the province. He tells us he is greatly concerned by the picture that is emerging.

“We are trying our best, but my biggest fear is that we’re sitting with the makings of a human catastrophe. So many people are getting sick – it’s dengue cases, malaria and gastro problems and we can’t help them all.

“So what’s going to happen? Of course there are going to be deaths, and we have to try and save them.”

Hundreds of people, including Muna and her young family, have made makeshift tents on a small piece of land in Lalbagh, one of the few places untouched by the water. But even here, the impact is being felt.

The ground may be dry, but there is no food or clean drinking water. It’s a situation growing more desperate by the day.

UN Secretary-General Antonio Guterres expressed concern about the situation during his visit to flooded areas last week, where he met families now left with nothing.

He has described the world’s responsibility to helping Pakistan as a matter of justice, not generosity, but how would he get richer countries to listen, I asked him.

Mr Guterres urged rich nations to help poor countries such as Pakistan to recover from tragedy.

“We need a world in which peace and security can only be guaranteed if you reduce inequalities,” he told me.

“Pakistan is not responsible for this crisis, this was a product of climate change, this was caused by those that are populating the atmosphere with greenhouse gases. The G20, the biggest economies in the world, they represent 80% of the emissions, Pakistan less than 1%.”

Officials now say it may take months before the water recedes in Sindh and life can resume. But many people here, like Muna, do not have that kind of time.

She and others whom I’ve met in the last few weeks have had their lives destroyed – and it is becoming painfully clear that there will be no quick remedies to help flood survivors.

It’s a desperate place to be. People in Pakistan are hoping the world hears of their anguish – and that those with the power to help them rebuild their lives will do so soon. 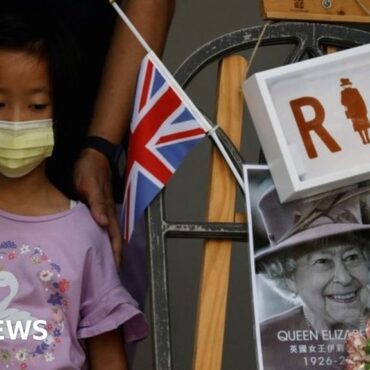 By Grace Tsoi and Joyce LeeBBC News, Hong KongImage caption, The ground is crowded with flowers, the Queen's photos and the occasional colonial flagHong Kongers have been lining up for hours this week to pay their respects to the Queen in what has been perhaps the biggest display of affection for the late monarch seen outside the UK.But the collective outpouring of grief says as much about the present as […]