Elections may be around the corner, but at the Ballarò market in the Sicilian capital of Palermo, the passions are not political but culinary.

Calls ring out from traders slicing fresh calamari or tempting passers-by with the delicious local speciality: arancini, or fried balls of rice and meat.

But there is little appetite for politicians here. Wandering through the narrow stalls, most of those we asked said they would not vote in the election next Sunday: disappointment, disillusionment, and dishonesty were the words we heard repeatedly.

Piling up ripe oranges and pomegranates outside her cafe, Sonia Capizzi was a rare exception: she has boycotted elections until now, but this time is different.

“I can see things are changing and it’s down to Giorgia Meloni,” she says, referencing the leader of the far-right Brothers of Italy party, who tops the opinion polls.

“She’s drawing me in because she’s a woman, a mum, and has grit and charisma.” 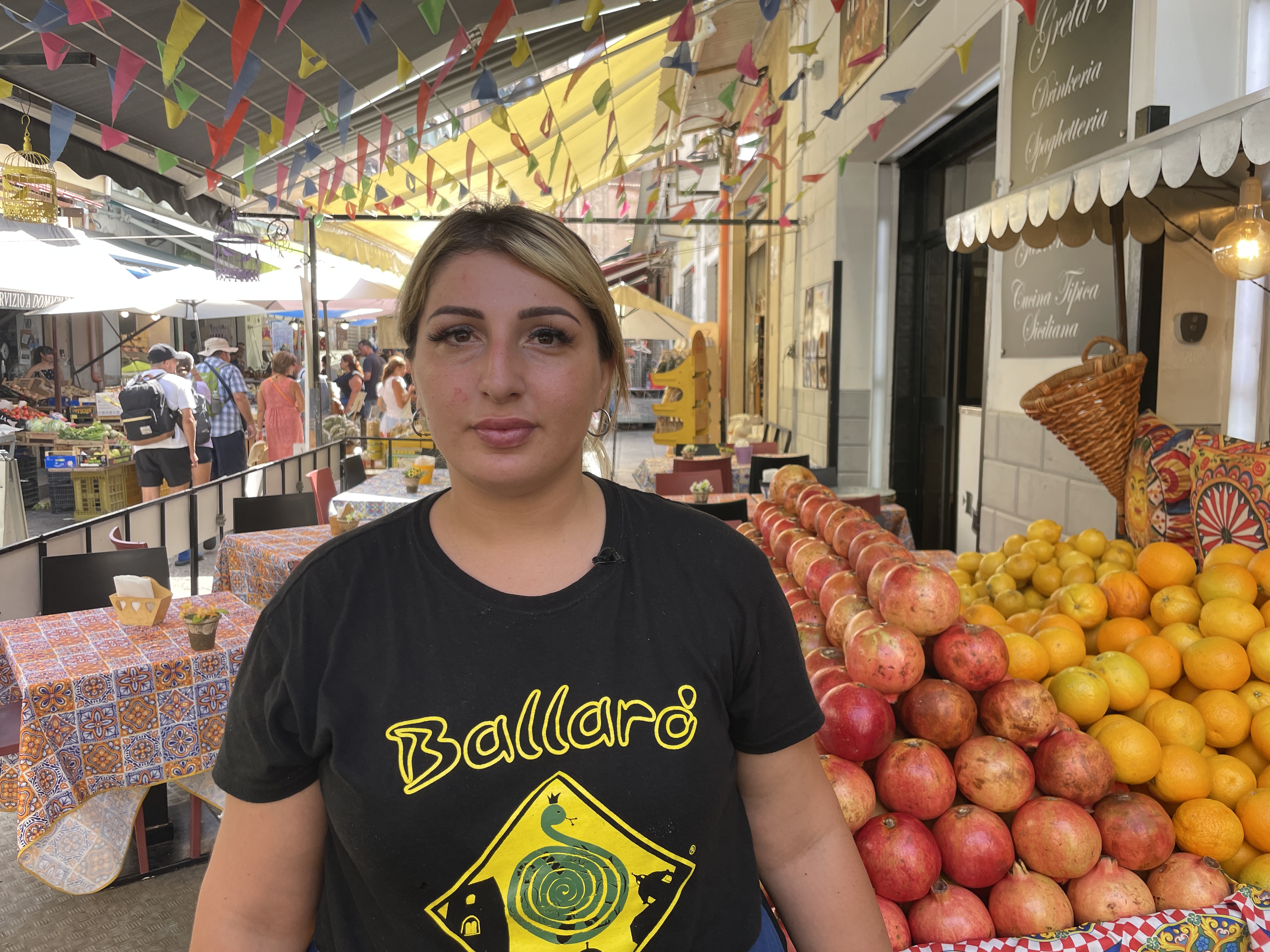 We women are the strongest. We’ll change the mood around here

In Italy’s last election in 2018, her party scored less than 4% in Sicily – just behind what she garnered nationally – while the populist, anti-establishment Five Star Movement came top with almost 50% of the vote here.

Four years on, Brothers of Italy have soared ahead, with the right-wing coalition it leads now scenting victory.

Her promises of tax cuts and a hard line on immigration are gaining considerable support here. But her pledge to scrap a flagship Five Star policy, the citizens’ income – a social welfare system for those below the poverty line – splits opinion.

The poorer south of Italy has benefited from it most and it is still a vote-winner for Five Star. But some, like Sonia Capizzi, follow Ms Meloni’s line that the policy has overburdened the state. “With the handout, people are just staying at home and not working,” says the cafe-owner. “The government should have created jobs instead.”

That is a view also echoed on the outskirts of Palermo, in the deprived Zen neighbourhood. The area is one of Europe’s most impoverished, where unemployment is at 50%, and at 80% among the youth.

Between their tightly packed apartment blocks, Domenico Finocchio and Piero Gambino peer at a field strewn with litter and broken glass. Beside it lie burnt-out cars and charred rubbish bins. Both men voted for Five Star in the last election but now say they will cast their ballot for Giorgia Meloni.

“We want this area to be cleaned up so it’s safer at night,” says Domenico. “You can’t even get rid of the rubbish because it’s swarming with rats.”

“We hoped Five Star would change things”, says Piero, “but they were all talk and no action and there are still no jobs. We feel very abandoned – and we hope Meloni will fix things.”

But Italy is as divided as it is diverse.

Across the country, in the northern city of Modena, plates of the local speciality, tortellini – pasta stuffed with meat – are being served up at the Festa de l’Unità, the annual festival of the centre-left. And here, the politics is of a very different taste to Meloni-land.

Speeches and debates focus on everything from education to the war in Ukraine, and talk over dinner is about how to stop Italy swinging to the far right.

“I’m very worried about Giorgia Meloni – she’s the worst idea of a woman I could have,” says Barbara Rosi, a marketing manager who has come with her family. “I’m worried she could touch our human rights, especially abortion. She represents the past for me – fascism – and she wants to bring it back.”

The Brothers of Italy leader vehemently rejects the fascist label, stating recently that it had been “consigned to history”.

But her party has neo-fascist roots, its flame symbol has been interpreted by some as the fire on Mussolini’s tomb, and a video emerged last year of some party members making fascist salutes.

What is clearer in Meloni’s political programme is her social conservatism, particularly her opposition to same-sex families. “Yes to the natural family, no to LGBT lobbies!” she roared at a recent rally of Spain’s far-right party Vox.

That strikes fear into the hearts of Christian De Florio and Carlo Tumino, fathers of four-year-old twin boys through an American surrogate. While the children build Lego in the kitchen, they tell me of their despair at what they call Meloni’s attempts “to erase families like ours”.

“Her strategy is to define enemies,” says Carlo. “Gay people like us, transsexuals and immigrants are enemies – and I don’t like this way of expressing herself. She always seems angry with people that don’t represent her idea of society. But I think in this society, there should be a place for everyone. That is democracy.”

In its constant search for a political identity, Italy is again trying something new, hoping perhaps it will finally bring change. But many here worry that the leap into the unknown could well turn out to be a very dark ride.

Grimes has new music on the way -- and maybe a new look, too. In photos shared to Twitter over the weekend, it appears the singer has undergone plastic surgery in order to permanently sport a pair of elf ears.  The 34-year-old shared a snap of her with medical wrap around her face with the caption, "I did smthn crazy!" In another tweet, Grimes revealed that it was there, in the […]