The clock is getting closer to striking Midnightsas Taylor Swift is revealing new details about her forthcoming album. The 32-year-old artist revealed a new track title on Tuesday night in a silly TikTok video.

In a playful new series Swift dubbed Midnights Mayhem With Me, she confesses, “I know that I have a habit of dropping cryptic clues and easter eggs when giving you information about my music and I am not here to deny that but I am here to defy that.” She then goes on to use a bingo ball cage to randomly select numbers that correlate to the 13 tracks on her Midnights album.

First up is the closing track, her lucky number 13, titled “Mastermind.”

The reveal followed a huge honor for Swift, who received the Songwriter-Artist of the Decade award from the Nashville Songwriters Association International at the NSAI’s annual ceremony. She accepted in person at the Ryman Auditorium in Nashville along with hitmaker Ashley Gorley, who was named Songwriter of the Decade for his catalog that includes 63 chart-topping hits.

Swift stunned on the red carpet in a figure-hugging, single-sleeved black glittery dress with cutouts and a thigh-high slit. She pulled her blonde hair back, leaving only her sleek bangs forward atop smoldering eye makeup and a dark red lip.

“A good song stays with you even when people or feelings don’t,” Swift said in her acceptance speech. “Writing songs is a calling and getting to call it your career makes you very lucky. You have to be grateful every day for it and for all the people who thought that your words might be worth listening to. This town is the school that taught me that and to be honored by you means more than any genre of my lyrics could ever say.”

She also performed a stirring live rendition of her “All Too Well” 10-minute version.

The appearance comes following Swift’s announcement of her Midnights album at the MTV Video Music Awards last month. For more on her big night, watch below.

Taylor Swift Requested a Role in ‘Twilight’: Here’s Why She Got Denied 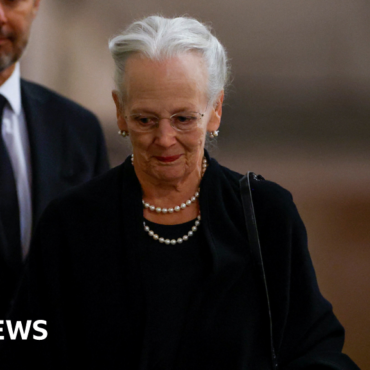 By James GregoryBBC NewsImage source, PA MediaImage caption, Queen Margrethe and Crown Prince Frederik view Queen Elizabeth's coffin at her lying-in-stateThe Queen of Denmark has tested positive for Covid-19 for the second time this year, the Danish Royal Court has confirmed.Queen Margrethe II has cancelled her appointments for this week after the diagnosis on Tuesday evening.The 82-year-old monarch was one of 2,000 guests who attended Queen Elizabeth II's state funeral […]